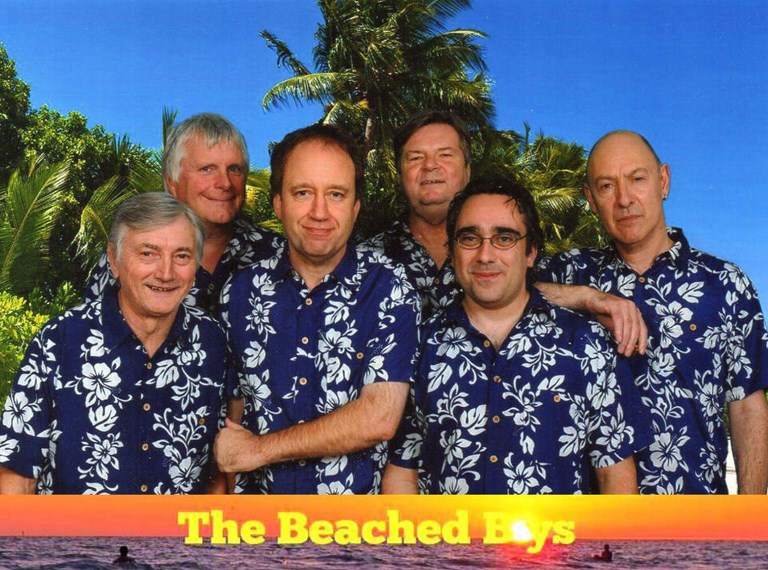 The idea to form a new band originated from a request from a television company for them to appear in a programme hosted by Ann Robinson based on American themes. The success of this appearance led them to rehearse a set of songs to take on the road. This was an instant success as bookings for shows and private functions. Their accurate harmonies and tight mix of two guitars, bass, drums and keyboard create the nostalgic feel of those fun days from the 60's, 70's and 80's.

Listen in amazement as Dave, Paul, Kevin, George and John recreate the super summer sounds of Brian, Mike, Carl, Al and Dennis, who made up the inspirational and very different California group The Beach Boys. Hits like 'Little Deuce Coup', 'I get Around', 'Surfin Safari' and 'Help Me Rhonda' should get you yearning for the sun and surf.

With their neatly trimmed harmonies, the Beached Boys magically capture the original sixties surfing sound of the Beach Boys. In the sixties, at the height of their original popularity, the Beach Boys propagated their own variant on The American Dream, painting a dazzling picture of beaches, parties and endless summers.

"Here in the UK, after many years of Gidea Park being the mainstay, there are now many Beach Boy styled bands on the circuit, with the Beached Boys currently being considered the best".