The Clashed - A Tribute to The Clash 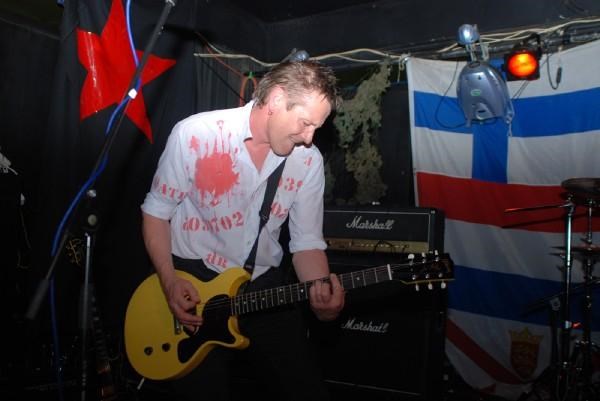 A review:-
Tonight was always going to be a very special night, billed as "Two Hours of music by The Clash", the only band that matters. With Joe Strummer sadly no longer with us this was a celebration of his life and his band The Clash.

The stage had a backdrop of flags of various nations with a stunning light show, possibly the best I have seen at Mr Kyps. The band strolled on to the stage, picked up their instruments and launched into English Civil War. I suppose most fans are always a bit nervous when they see a tribute band for the first time, just in case they don't do the band they are supposed to be justice, nobody need worry as these four lads had the sound just right.

The band comprises Mick(Guitar/Vocals), Oz(Guitar/Vocals, Paul(Drums/Vocals) and Loka(Bass/Vocals) and you can tell from the offset that they are no ordinary tribute act. They are so obviously fans of the band and their music, you could also see that they had a great deal of fun up there on stage playing music by their heroes.

There was a something for everyone, album tracks, b-sides and of course the more well known singles, after about 20 minutes on stage Mick announced to the audience "There's a party going on at the front, everybody's welcome to join in", the early dancers at the front were joined by many more, the mosh pit was a sea of aging bodies jumping up and down, loving every minute of it. The Magnificent Seven, Guns of Brixton, Clash City Rockers and b-side The Prisoner were all received brilliantly with most of the audience singing along to every word. I think most casual fans of The Clash are familiar with the classic singles such as London Calling, Should I Stay or Should I Go and I Fought the Law, however when you listen to two hours of their music you can hear there is so much more to them, all sorts of influences and a mix of different types of genres like punk, reggae and rock.

The best song of the night for me had to be Joe Strummer's masterpiece Straight to Hell which The Clashed performed perfectly and with the same attitude that the original band had done. I must single out Oz as a absolutely amazing guitar player and vocalist, he looks the part and sounds the part, he takes on Mick Jones and Joe Strummer parts equally well. A Toots and the Maytals cover, Pressure Drop was thrown into the set to add a bit of variety and this had the Kyps crowd frantically dancing along.The last two numbers I have to say were just fantastic, apart from being my two favourite Clash numbers, Complete Control and White Riot were performed with so much energy. This put together with the strobe lighting and the whole place had just an amazing atmosphere, such a fitting way to end the evening on an absolute high.