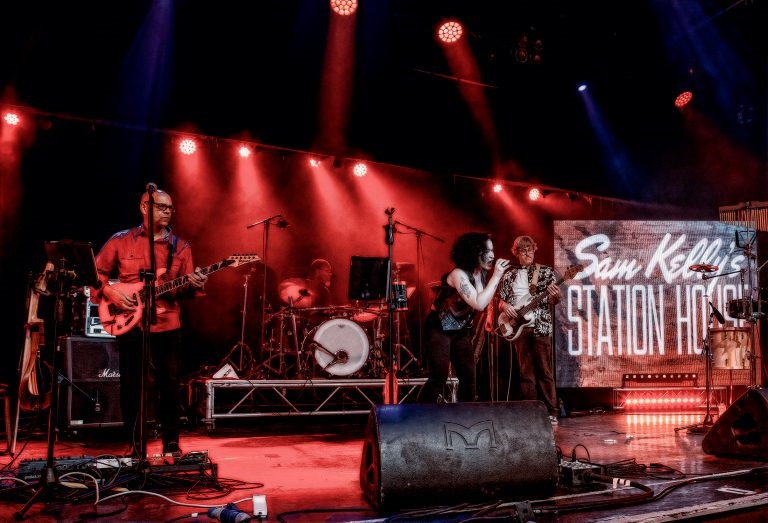 SAM KELLY’S STATION HOUSE “some of the best – and I mean best – musicians in the UK.  Or anywhere come to that”  PAUL JONES (The Blues Band, Manfred Mann)

Sam Kelly is a professional musician with more than 40 years in the business.  His “Station House” band has been featuring on the UK/Worldwide music scene for many years.  Originating from London’s “Station Tavern” in the early nineties, Station House has seen a wealth of quality musicians come and go over the years, all with one common goal in mind – to mix instinctive funk/soul rhythms with the diversity of the blues.

In 2020 Sam re-launched the band as a 4-piece featuring Sam Kelly (drums), Richard Sadler (bass), Tony Qunta (guitar/vocals) and Rowena Poole (lead vocals) and this format continues to work at venues and festivals all over Europe/UK.

SAM KELLY’S STATION HOUSE is a blues-based “groove” band with a unique sound that is influenced by New Orleans second line, soul, jazz and British funk.   They are a vibrant, energetic band who really know how to entertain a crowd.

Fans across the World have waited more than ten years for news of a new SAM KELLY’S STATION HOUSE album.   “No Barricades” has now been released, crammed with original arrangements and funky blues tracks.  This album is a collaboration of work also involving previous band members, Paul Jobson (MD/keys/vocals) and Jerome Marcus (percussion/bvs).  Both of these wonderful musicians and great friends of Sam Kelly’s Station House, have moved on with different projects and we wish them all the best in their new endeavours.

The new album also acknowledges the great works of TW Henderson, incorporating a selection of tracks from “The Wilderness Years” album.   One of the most powerful tracks entitled “Black & White” has been captured on video